…A Hazy Shade of Winter…

You know the drill. Headline first. Then a march through the methodology. If you want single-serving factoids, go to, well, pretty much anywhere else on the Internet.

Donald Trump arrives in the office almost an hour later than any President since 1933. His average arrival time is 10:42 am for his Presidency, and 11:18 a.m. for 2018. He spends the least amount of time in the office as well, though under 8 hours of office time is a trait shared with 5 of the past 13 presidents.

So to answer the several dozen questions we’ve received on this topic: you’re not imagining it. But, like all things in life, it’s not so cut and dry.

Hang onto your hopes my friend.

So this question has been asked a few times. But who on earth has time to rummage through a dozen presidential libraries? Apparently, we do.

At the Fact Cave, one of our more popular features is Donald Trump’s daily schedule. We’ve beefed it up of late. You can find monthly stats embedded, miles traveled, record counts, time on camera. Look for the plus sign in the Month bar.

But no good deed goes unpunished. We’ve been asked whether it appeared that Donald Trump was coming to the office later in the day, particularly after his busy election season. We did a quick check. But it’s the holiday season in D.C, which like August, tends to be a “what, me work?” kind of month, even for Presidents, and certainly in D.C., whether or not it’s shut down.

Trump is not in the West Wing yet this morning, NBC's Hans Nichols just reported on @MSNBC. The Marine guard is not posted out there. 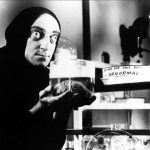 The volume of questions picked up. So we started digging in and, lo and behold, it looked like there were some interesting patterns in Trump’s schedule. But without a cohort, there’s no way to tell if it was a normal pattern. Which leads to our favorite word: cohort.

It’s bound to be a better ride.

So, much like how Factba.se started, we sometimes jump first, then find out if there’s water in the pool. So, really, how many pages could a Presidential schedule be?

83,229 pages since Roosevelt, in a dozen different presidential libraries. 67,173 of those pages scans of typewritten logs. 13,905 of them handwritten (in fairness to LBJ, some were typed… but not a lot).

Sure. We were so glad we decided to try this. Around the holidays. Shoot me.

Luckily, it’s good to be friends with an AI that has read about 1.2 million pages of government PDFs in her life. Especially when you helped program her. And pay her AWS bills. So really, other than some truly awful scans, we could pull the vast majority of the data.

You want the blog post, or do you just want to complain about my wandering non sequiturs? Actually, I was thinking of The Bangles version from 1987 (though they played it live as early as 1983). Though nothing but love to Simon & Garfunkel.

We were able to locate the schedule of nearly every President from Roosevelt forward, or enough portions to be statistically valid. Only the George H.W. Bush Library doesn’t have either the Daily Guidance or the Daily Diary available online. We had to take what we could get from the National Archives. The George W. Bush Library has the schedule for 338 of his 2,922 days… not ideal, but enough for a good statistical sample. We’re noticing a familial pattern here on data availability.

Because this was a lot, we were going for a statistically valid sample, not perfection (we made that mistake initially and burned two days… story for another time). So we unleashed Margaret. For 31,348 days since March 4, 1933, we had data on 26,564 of them. We ended up eliminating some days for vacation (no start or end appointments), others because the data was missing, and some if Margaret just said “hey, I’m not sure about this day.” We were working with half-century old documents in some cases.

Not All Schedules Are Created Equal

As with any historical data, you work with what you have. So it’s important to understand the two different types.

Daily Guidance
The “Daily Guidance” or “Daily Schedule“. This is what we have for Trump, Obama and Clinton, and it appears to be the level of depth for what we have for Truman, Eisenhower and Kennedy in that it’s very high level and doesn’t tend to go into breakfasts, dinners and 3-5 minute meetings. It’s the high-level items. For Clinton/Obama/Trump, this is the schedule published to the members of the media. This will sometimes include appointments that were canceled… not often, but it does happen. It also reflects what was scheduled… not the time things actually occurred.

And perhaps most important. It is intended for public consumption at the time it was issued.

Daily Diary
The “Daily Diary” we have for nearly everyone else is the log kept by the Presidential Office of Appointments and Scheduling. It is an exact record of what actually happened. In addition, since it is meant for posterity, and can be redacted for security, it is a far more detailed account of the day and will include things that may not have been in the public schedule. Also, these usually aren’t released for a couple of decades, if at all.

The level of detail can also vary. Roosevelt’s daily schedule includes notes from his stenographer, the White House usher, and his personal appointment diary. Reagan’s includes his personal diary entries as well as the official log.

What does this mean? When looking at the office hours, some entries are more detailed, and thus cover more time. Truman’s diary doesn’t have a lot of records once he “left the office,” so to speak, where Roosevelt’s details who he drank and smoked with at midnight. The chart above groups the hours by who had what type of data available.

More details in the methodology at the bottom.

Okay, What Did You Find?

First, we were able to validate what our readers had emailed and tweeted about. Trump starts his day later in the office than any other President since 1933. That’s definitive, regardless of schedule type. For his presidency, his average first scheduled appointment is 10:42 a.m. This is 47 minutes later than the next closest average start time, which belongs to Harry Truman. 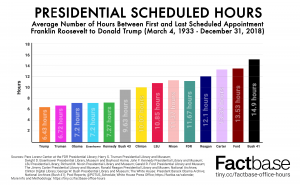 Trump also has the shortest day, in terms of the time between his first and last appointments. His average scheduled time, as published, is 6 hours, 26 minutes. This is less than half the average time logged by George H. W. Bush (see below), Gerald Ford or Jimmy Carter, who had a more detailed schedule. But even within the sub-cohort, it was the least amount of scheduled time, on average, followed closely by Harry Truman.

Yes, Bush 41 stands out, but he comes with a large footnote, and not just for his super-sized scheduling.

The Bush 41 Library has not yet gotten around to publishing the entire Daily Diary to the Intertubes yet. It’s the only Presidential library that doesn’t have at least a partial, if not complete, set of schedules. The National Archives happens to have 41 (get it?) very complete schedules for two days in 1990 and 39 in 1991. It’s not enough to do a monthly/yearly, but it at least gives us an idea of his schedule. [Update 12/31 @ 6:55 pm ET. Thank you for the tip on the Web Archive! Now at 414 days for Bush. ]

And the man, in those 41 days, he started between 5 and 6 am on 30 of those days. He’s got one all-nighter in the set of schedules. I’m fairly certain there was a whole section in there where he caught up with Clint Eastwood, got drunk on rye, then proceeded to beat the crap out of Ivan Drago while Eastwood glowered. And he was still up at 5 the next morning for breakfast and phone calls.

Suffice it to say, without any editorializing, day-um.

But also suffice it to say: we were comfortable including it in the overall average only, given it is 41 days. The schedule has a regularity to it missing from all the other schedules. He was a man of routines. But it is still based on 41 days from the National Archives out of his 1,461 days in office. So take the data with appropriate caution. [Update 12/31 @ 6:55 pm ET: now 414 records, revising average start to 7:50 am and average last item at 10:44 p.m., just shy of 15 hours on average per day.]

That’s an absolutely fair point. Trump is known to be awake at all hours tweeting on @realDonald Trump. We’ve even included the distribution data so you can see for yourself.

But here’s the thing: is it actually Trump tweeting? We can work off lots of different types of data. In looking at first/last tweets every day for an indication of schedule, it literally spans 24 hours on @realDonaldTrump. Of 710 days checked, on a midnight->midnight basis, 260 of those days had their first tweet between midnight and 5 a.m. (36.6%). If we arbitrarily assume 5 a.m. is a starting point, then the last tweet of the day occurred between 12-5 a.m. 275 times or 38.7% of the time.

But was it him? Or Dan Scavino? Or someone from the social media team? Or the press office?

We have a bot that uses as reference data tweets from when he was the only one on his team using an Android to tweet, and everyone else used an iPhone. Using thousands of those tweets, our model is able to predict, with 91% accuracy, if he tweeted something, or if his staff tweeted something, based on the language, use of hashtags and images, and so forth (hint: he rarely uses hashtags or images, but his staff uses CAPITAL LETTERS in almost equal proportions when using the account).

It’s not bad, but not perfect. But using that as a reference, our bots say 54% of those midnight-5 a.m. tweets are staff. That’s way too high a number to assume it’s Trump thumbing the tweet.

Take a look at the data for yourself and see if you can make better heads or tails of it. But for the purposes of this exercise, until a more detailed calendar is available, we’re leaving Twitter out of this, because if we use @realDonaldTrump as a guide to the beginning or end of the day, we’d have to ask if Trump has ever slept. Ever.

So What Does This All Mean?

We can pretty safely say he’s not a morning person, at least as far as his official calendar goes. And we no more think Trump leaves the office at 5:18 p.m. with nary a thought about his job than we think three-hour gaps in the middle George H.W. Bush’s schedule meant he was refining his knife-fighting skills.

What we can say, pretty definitively, is his official calendar starts later than any time since 1933 by a wide margin. His last meeting isn’t the earliest… that belongs to Eisenhower (3:47 p.m.). But what we basically did is answer the question: is he getting to the office later? The answer: yes.

So now, the data, methodology, and notes.

We have the data in a handy Google Sheet .  It includes the monthly and yearly data for each President and their schedule, along with the original raw data. It also includes the twitter data referenced above. A summary is below.

View or Download All the Data in a Google Sheet

Happy New Year! By request, here’s the same data (using the 7-day per week vs M-F) by month just for Donald Trump.

One thought on “Presidential Office Hours: Donald Trump’s Schedule Vs. FDR Through Obama”