So we’ve been working on getting Campaign 2020 Factba.ses up since the summer. It was due to post Labor Day. Suffice it to say, we’re late. We’ll publicly commit to “before New Hampshire” and try to exceed expectations. 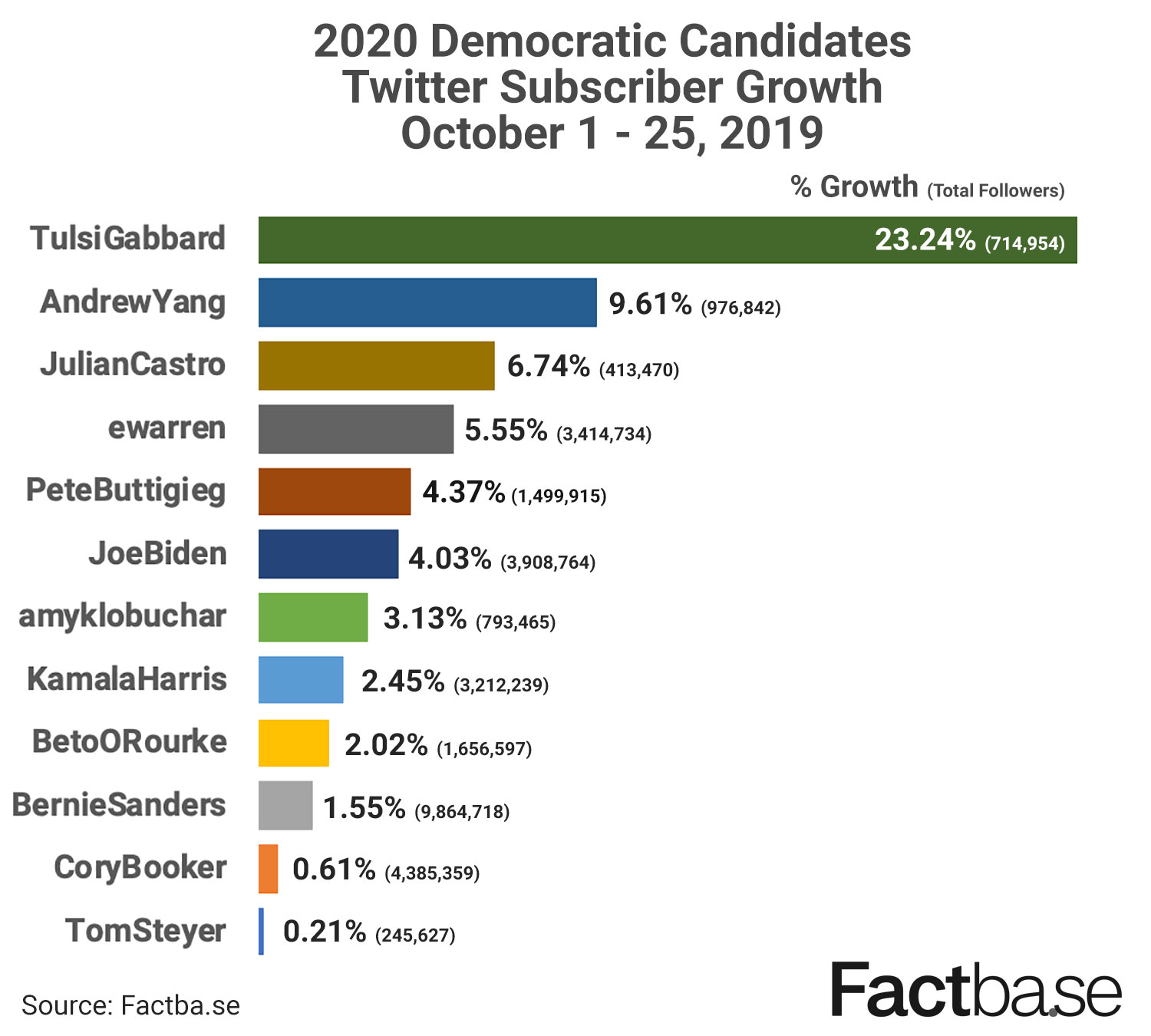 As part of that prep work (and part of a request from a news organization… tune in to Reliable Sources on CNN 10/27: bumped due to Abu Bakr al-Baghdadi… sigh… always a bridemaid, never…) we were re-pulling some numbers on Twitter on all the 2020 Democratic candidates, and noticed Margaret, our AI, had flagged a “Hey Human” alert on Tulsi Gabbard’s data.

To which we said: “Tulsi Gabbard?”

She’d flagged a spike in Twitter followers. Between October 1st and October 25th, her twitter following spiked 23.9%, more than double any other candidate in the same time period. And not a small number of followers… 134,817 of them, to be exact. In terms of raw numbers, Bernie Sanders, Elizabeth Warren and Joe Biden had a bit more, but their accounts were, as of October 1st, all at least 5x larger than her account:

We poked around a bit more and looked at her YouTube account (Twitter and YouTube tend to have the greatest data for measuring traction), and hit our second “wha?” moment. Her YouTube account was also punching far above its weight class. With 125,000 subscribers (YouTube starts rounding numbers to the thousand above 10,000 subscribers), her YouTube account has more subscribers than any other candidate except Bernie Sanders (242,000). Some 28,000 followers showed up in October. Even before that, she was in the top cohort with only Andrew Yang above her (plus Bernie). Yang, like Bernie, has an intense social media following and presence. Gabbard is not known for that. And her video views are similarly enormous… 20,427,696 views. Bernie does have 42,108,941. But no other candidate has more than 10,000,000 views on YouTube.

The initial size of her YouTube audience, even before the spike, doesn’t gel with her online presence, footprints, or anything else. It’s an account with views and subscriber counts appropriate for a front runner, or someone very specifically engaged with social media, like Yang.

Wasn’t there a debate in October?

Only on days ending in “y”. Seriously, October was a debate month. We went to SocialBlade, our favorite quick check on social media status, and saw the spike happen right on October 19, 2019. Great! Problem solved… except the debate was on October 15, 2019.

So what happened a couple of days after the debate?

This: The New York Times: Tulsi Gabbard Lashes Back at Hillary Clinton After Claim of Russian Influence

So the Tulsi Gabbard / Hillary Clinton back and forth. That would account for a spike, but would it?

The only candidate who shows any month-over-month growth at all in the double digits is Andrew Yang, and it’s consistent. Every month since March (when we started tracking data for him, he’s grown followers and subscribers at 9% or more every month. So while he’s an outlier in terms of support vs. social media, it’s consistent, and also dovetails with his general online presence.

You Missed the Obvious. Polls and money.

So we ruled out the kerfuffle and went old school. Polls and money.

There’s nothing that politicians love more than polls and money. We’d surely find some correlation there.

We hit The New York Times calculated tracking poll, which averages all the polls in a number, and expected to find a similar spike. It’s very useful as a snapshot. And we found the answer. 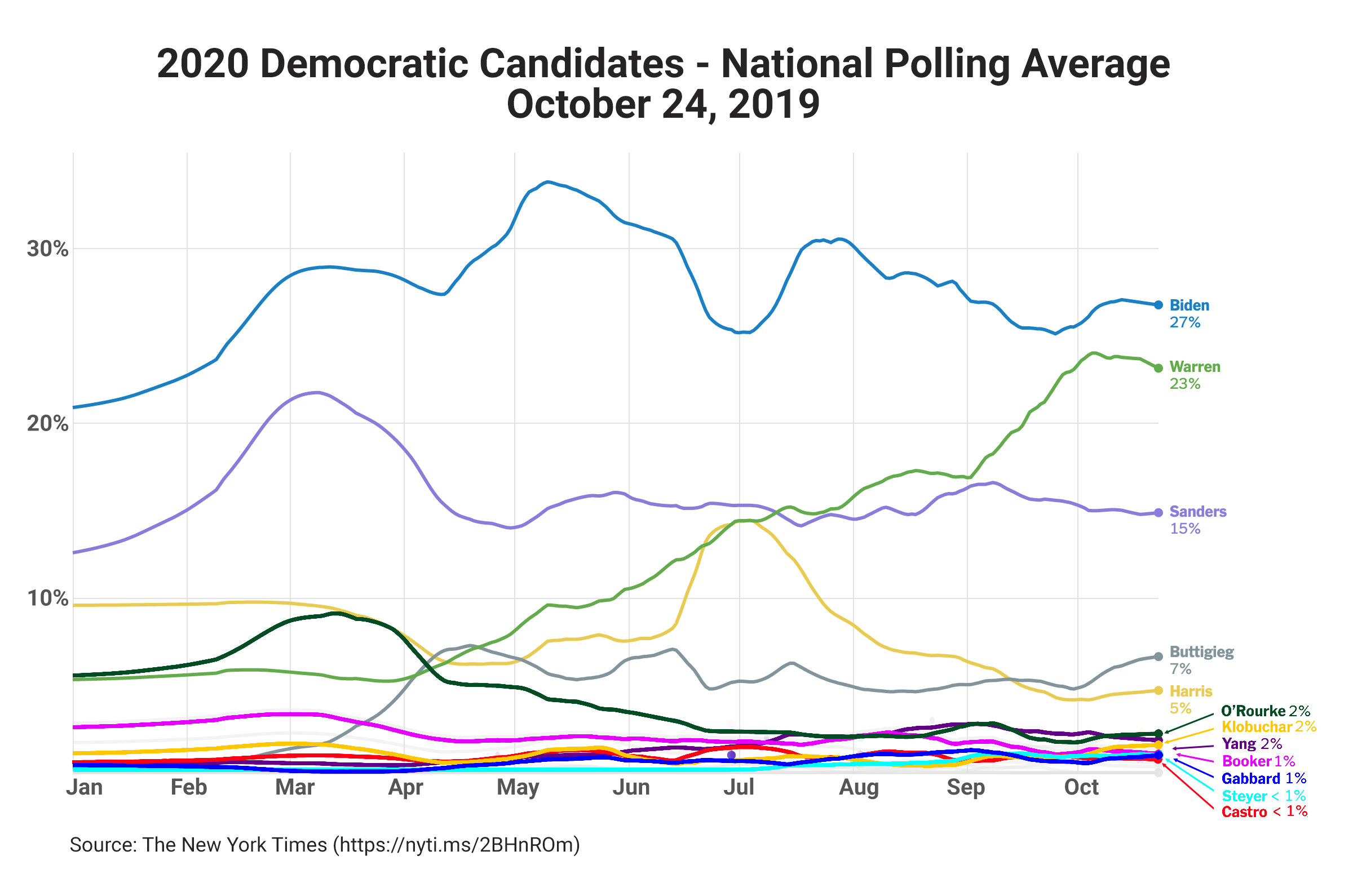 Not even a blip. See the chart above.

Our next stop was fundraising. As for fundraising, we can usually see correlations with either an announcement or pegged to events like outstanding debate performance.

So we went to Politico for the most recent numbers (which only go through September 2019). Not only did we not find a blip, she’s dead last in fundraising. 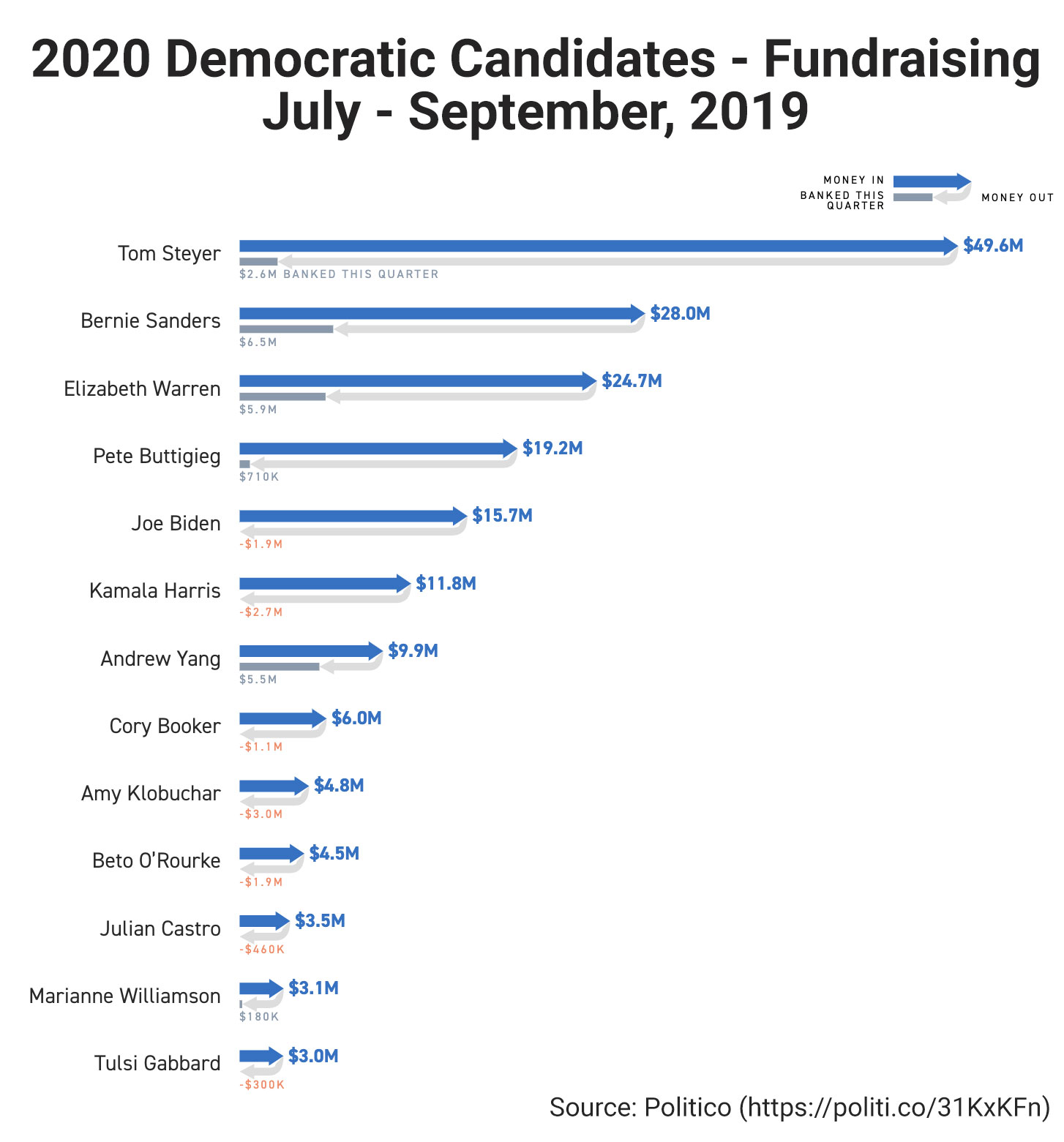 So what we had was a good old-fashioned data mystery. We had an effect (the spike), without a cause that was proportional to the increase.

How about space aliens, while we’re at it? If there’s anything a quarter-century of Internet has taught us, it’s that no one expects the Spanish Inquisition. Put another way, if you think you know the answer, you’re probably wrong.

Case in point, we experience what we call “Q Spikes” here in the Fact Cave. They’re characterized by a sudden burst, over hours, of sometimes more than 100,000 visitors in a few hours. We first assumed thoughtful, insightful research on a hockey stick curve. Invariably, it was always some 10,000-word post on Reddit linking to our data for use as proof for a QAnon theory.

[If you never heard of QAnon, don’t google it. It’ll save several hours of batshittery. To spare you from Googling: a conspiracy theory where either Donald Trump is or is not the puppet master / genius behind it, “it” being virtually anything, ever. Thus the screeds, and the spikes. Our position: QAnon is obviously L. Ron Hubbard. No need to to look further.]

But seriously, there’s no good way to tell. There are some good tools out there… stop by Botmeter for an example, but they’re more focused on detecting if an account is a bot, not if followers are the bots. Also, in the absence of any decisive data, we don’t like speculating here at Factba.se HQ.

But what we do like is data, and patterns. And this pattern… just doesn’t make sense. It’s an effect without a cause. A spike without a reason. Marie without Donny. A Garfunkel solo album. Just, no… it shouldn’t be. Yet it is.

While the spike in subscribers on Twitter and YouTube are, relatively speaking, enormous, there are no similar type spikes, or even close, for any other candidate going back to January 2019. And the argument between Hillary Clinton and Tulsi Gabbard was hardly the largest, or loudest, spat of the primary season. There should be similar spikes with other events for other candidates. But there are none. Period.

At a minimum, we can see patterns where account subs trend up on Twitter or YouTube, but we can always draw a parallel to polling data, increased media footprint, fundraising or usually all three. There is no increase in her media footprint, at least one that would resolve into the social media spike. There’s nothing in the polls. We’ll be watching for her October fundraising numbers, but it would need to be a pretty big spike to track with the other data.

So what are you telling us?

Exactly what we started with. Tulsi Gabbard has a social media presence that doesn’t correlate with any data outside social media. She’s seen a huge increase, statistically, in followers and subscribers, but those increases don’t match up with any similar-size news event or in her polling visibility. The data is interesting, so we figured we’d post it. But we’d love to know the reason. We’re open to ideas backed up with data.